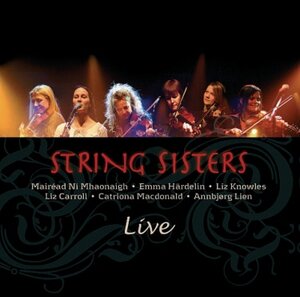 In February 2005, six of the world’s leading female fiddlers gathered to go on a grand tour that Norway had never seen the likes of. Now, at last, the long-awaited CD and DVD based on recordings from these concerts have arrived.

The six female performers, each of whom pursues an active solo career, gathered under the name “String Sisters” for the first time in 1998 to play at the roots festival Celtic Connections in Glasgow, Scotland. They enjoyed an overwhelming response, and the dream of assembling some of the world’s foremost female fiddlers in one place had become a reality. They followed this up with a hugely successful concert at the same festival the following year. Two years after their grand tour of Norway in 2005, String Sisters were ready to be reunited where it all started: at Celtic Connections in Glasgow.

Annbjørg Lien (Norway) – Lien has played a major role in revitalising Norwegian folk music, and is renowned as a very dynamic live artist.

Catriona Macdonald (Shetland) – famous as a bearer of one of the world’s greatest fiddle traditions. Her roots in the Shetland tradition, combined with her ability to renew herself and her willingness to take chances, have made her an extremely exciting fiddler. Her first album was released in 2000.

Liz Knowles (USA) – her fiddle style spans a broad range of genres, from jazz and rock to traditional Irish music, all while preserving the essence of the classical tradition in which she was trained.

Liz Carroll (USA) – although born and raised in the USA, she is regarded as one of the foremost fiddlers in the Irish tradition. She has received an array of awards and distinctions.

Mairéad Ní Mhaonaigh (Ireland) – is both a fiddler and a singer. She is one of the leading exponents of Irish folk music, in particular the Donegal tradition. She founded the Irish folk music group Altan together with Frankie Kennedy in the 1980s.

Emma Härdelin (Sweden) – is, like Ní Mhaonaigh, both a fiddler and a singer. In 1993, at the age of 17, she started performing as a vocalist in the Swedish folk-rock-electronic group Garmarna. In 1995 she founded the group Triakel together with Kjell-Erik Eriksson, the violinist in Hoven Droven, and Jan Strömstedt.